“Our demand is simple: Fire Kathleen Stock. Until then, you’ll see us around.” ‘Anti Terf’ students at Sussex University target professor of philosophy in campaign of harassment

Students at the University of Sussex have embarked on a campaign of harassment against Professor Kathleen Stock, reports Jo Bartosch. Stock, a professor of philosophy, is a lesbian and the author of the gender critical book Material Girls: Why Reality Matters for Feminism.

A group called ‘Anti Terf Sussex’, which describes itself as ‘an unaffiliated network of queer and trans students’ released a statement branding Stock ‘anti-feminist, anti-queer and anti-intellectual’ and ‘one of this wretched island’s most prominent transphobes’. The angry screed continues to accuse Stock of contributing to the ‘dire state of unsafety for trans people in this colonial shit hole’. It concludes with a sinister ultimatum ‘Our demand is simple: Fire Kathleen Stock. Until then, you’ll see us around.’

In addition to the statement, posters have appeared demanding that Stock be sacked and students have photographed themselves on campus releasing burning flares and standing with banners reading ‘Stock out.’

Sussex police have been alerted to the campaign and confirmed on Twitter that they are investigating. The posters have now been removed.

The LGB Alliance, of which Stock is a trustee, said they “stand with Kathleen Stock against the vile abuse and threats she has faced, not only in the last week, but over the last several years.”

“Gender ideologists rely on creating a climate of fear: they aim to create a chilling effect that poisons or, ideally, prevents public discourse. This tactic no longer works. Many groups, LGB Alliance among them, are now exposing the true nature of gender ideology, and the impact it has on women, children, homosexuals and other groups.

“For years, we were told that there was #NoDebate to be had about gender and that it was hateful for people to discuss the loss of their rights. Thankfully this debate, so long postponed, is now taking place.”

Stock has not received support from all of her colleagues. On social media Dr Francesco Ventrella, an art history lecturer at University of Sussex, said that he supported the students and complained that Stock “debates the validity of trans lives”. He then locked his Twitter account after he received criticism. 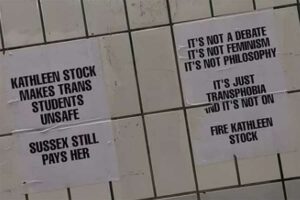 Posters attacking Kathleen Stock on campus at the University of Sussex

Unlike incidents at other universities over the past few years, senior staff at the University of Sussex have stood by Stock. Vice Chancellor Adam Tickell said:

“We are investigating activity on our campus which appears to have been designed to attack Professor Kathleen Stock for exercising her academic freedoms. Disturbingly, this has included pressuring the University to terminate her employment. Everyone at the University has the right to be free from harassment and intimidation. We cannot and will not tolerate threats to cherished academic freedoms and will take any action necessary to protect the rights of our community.”

The University said it was ‘extremely concerned’ by the ‘harassment’ Stock had suffered and confirmed the posters had been removed.

Academic institutions are increasingly alive to the legal ramifications of allowing policy to be set by censorious bands of bullying undergraduates. In May, an investigation into the no-platforming of Professor Stock and her colleague Professor Rosa Freedman by University of Essex was unequivocal about the duty of public bodies to protect freedom of speech. The Reindorf Report clearly stated that universities must also protect academic freedom, including the ‘freedom to disseminate information and freedom to conduct research and to distribute knowledge and truth without restriction’.

There has been an out-pouring of support for Stock on social media, with the Free Speech Union and Academics Anonymous taking up her cause.

“The students who made the smear campaign posters against Kathleen Stock need to be disciplined and expelled. No member of staff should be expected to work in an environment where this sort of thing is allowed to happen.”

Both the LGBT+ society and the Student Union Women’s Officer have criticised the response of the Vice Chancellor. The University of Sussex Students’ Union added on Twitter:

“In light of recent events on campus and social media, we want to offer support & resources to trans and non-binary students. We oppose transphobia and want our University to be a place where all trans people receive support and solidarity.”

But a University of Sussex spokesperson said: “We were extremely concerned to see the harassment towards our staff member and took immediate action in response to this, which we continue to do.

“We are deeply committed to being a safe and inclusive university, which values and advances equality and diversity, seeks to resolve conflicts, advances good relations and upholds lawful free speech.

“As a university community, we must be able to have complex discussions without bullying or harassment. We will always take swift action when this occurs. Our role as a university is to facilitate such conversations to advance shared understanding and common agreement. We insist that these are carried out respectfully and are always protective of our staff and students.” 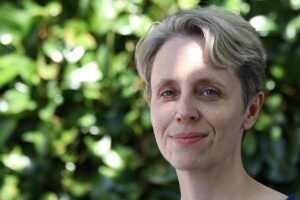 In a later message to students titled “Listening to others we don’t agree with”, the University said: “One of the most important aspects of being a student at Sussex is challenging our own thinking whilst listening to others we may not agree with. This sits at the heart of our values as an institution. We believe passionately about academic freedom of speech and expression, even if as individuals we disagree with the views of others in our community.

“This week we have seen materials displayed around campus that goes against these values, and constitute harassment towards a member of staff, which is very serious. We’re looking into this as the University cannot tolerate threats to our academic freedoms and will take necessary action to protect the rights of our community. I hope you understand why this is so important to us.”

Kay Knight on Birmingham Pride: “Our equality and freedom isn’t the big Pride event, it’s being able to be openly ourselves when there are no rainbow carnival vibes to protect us.”

by Lesbian and Gay News
5.1k

Claire Heuchan: I don’t mind the straights, but why does everyone need to know they’re straight?

by Lesbian and Gay News
4.3k

The accidental camp of trans activism, by MrMenno