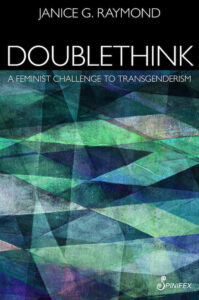 Janice Raymond is best known as author of The Transsexual Empire. First published in 1979, the book predicted the medicalisation of gender identity; the troubling implications that self-ID has for how lesbians define our sexuality, build our community, and create our spaces. And having foreseen one of the most divisive political issues of this era, Raymond is back with a new book. Doublethink: A Feminist Challenge to Transgenderism is published by Spinifex – an independent feminist press, and one of the few publishers with the courage to print work critical of gender identity.

As Raymond says, “this book is not The Transsexual Empire #2… It is much more about girls and women who are transitioning and de-transitioning, whereas there were very few females in the 1970s and ‘80s who turned to transsexualism and resorted to hormones and surgery.” The exponential rise in FTM transition, and resultant increase in detransition, are at the heart of Doublethink. Raymond explores homophobia, internalised misogyny, and trauma is potential factors behind identifying out of womanhood – which leads to many of the book’s most compelling passages.

Detransitioners are often overlooked by both ‘sides’ of the gender debate – delegitimised by some trans rights activists who want to hold the party line on gender identity, and treated with distaste by some GC women whose squeamishness is rooted in homophobia. Therefore, it is to Raymond’s credit that she amplifies the voices of so many women who have detransitioned. She cites a wide range of articles, blog posts, and YouTube videos, highlighting the pattern of academic censorship that stands in the way of formal research into the lives of detransitioners.

But Raymond’s openness to less traditional sources also leads to Doublethink’s greatest flaw. To back up her argument that the “rollout” of transgenderism is pushed by industry, Raymond cites Jennifer Bilek’s articles and blog posts, many of which heavily feature conspiracy theories revolving around Jewish billionaires.

And this is not the only questionable reference. Raymond repeatedly draws attention to the Women’s Liberation Front (WoLF), claiming that they work “based on feminist principles with a focus on fairness to women.” But WoLF has repeatedly joined forces with the religious right, aligning themselves with organisations that seek to dismantle the rights of women – lesbians in particular. As she is a radical lesbian feminist, it is surprising that Raymond does not concern herself with addressing this contradiction.

Such oversights undermine Doublethink’s credibility. And this is a real pity, because the book otherwise contains many valuable insights. Raymond is on top form when she writes about the persecution of feminist academics such as Rosa Freedman, Selena Todd, and Kathleen Stock. It is impossible to read her account of female prisoners being raped by self-defined woman, of a dead rat being nailed to the door of Vancouver Rape Relief and Women’s Shelter in the name of trans rights, without feeling a burning fury that the safety and dignity of women are being compromised.

This book showcases not only Raymond’s intellect, but her courage, which is every bit as immense.

With a directness that is characteristic of her work, Raymond cuts through the culture of fear and intellectual dishonesty that defines many discussions around gender identity. She names injustice after injustice, each with a common root: misogyny. And in so doing Raymond challenges the reader to question their own role:

“When labels turn people into fearful bystanders incapable of expressing an honest opinion, not just individuals but institutions are given permission to disparage women, and governments are emboldened to draft (and pass) legislation that codifies gender tyranny and erases women’s rights. Many people want to remain ignorant, not the ignorance of innocence, but a chosen ignorance that wills not to know.”

Doublethink will appeal greatly to those who already agree with Raymond. But it is not a book to change hearts and minds. References to the “woke trans police”, descriptions of Gender Studies courses as “laboratories of transgender research and activities”, pepper the text. Such inflammatory language is more likely to alienate undecided readers than rally them to the cause of radical feminism. And yet, if there are moments in which Raymond comes across as dogmatic, it doesn’t take a genius to work out why.

Despite all the good Raymond’s work has done in the lives of women and girls, she has been demonised and harassed since the 1970s. Though Raymond does not dwell on the threats to her career or person, mentioning these experiences briefly in the introduction, they surely carry a deep personal cost. Raymond knows more than most about the violent misogyny weaponised against women who criticise gender identity. Yet still she chose to write Doublethink. This book showcases not only Raymond’s intellect, but her courage, which is every bit as immense.

Doublethink: A Feminist Challenge to Transgenderism is now available from Spinifex Press and all good bookstores.

Gary Powell: Do we need to get off Twitter and form a new, gender-critical political party in the UK?

Professional Judy: “Charities like Mermaids and Stonewall have used our well established organisations as a Trojan horse to push a deeply homophobic ideology.” 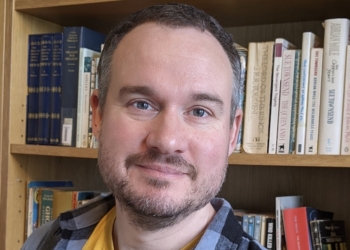 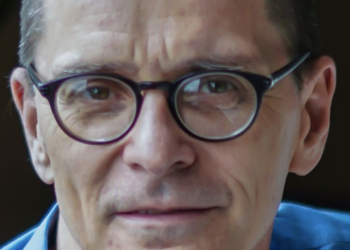