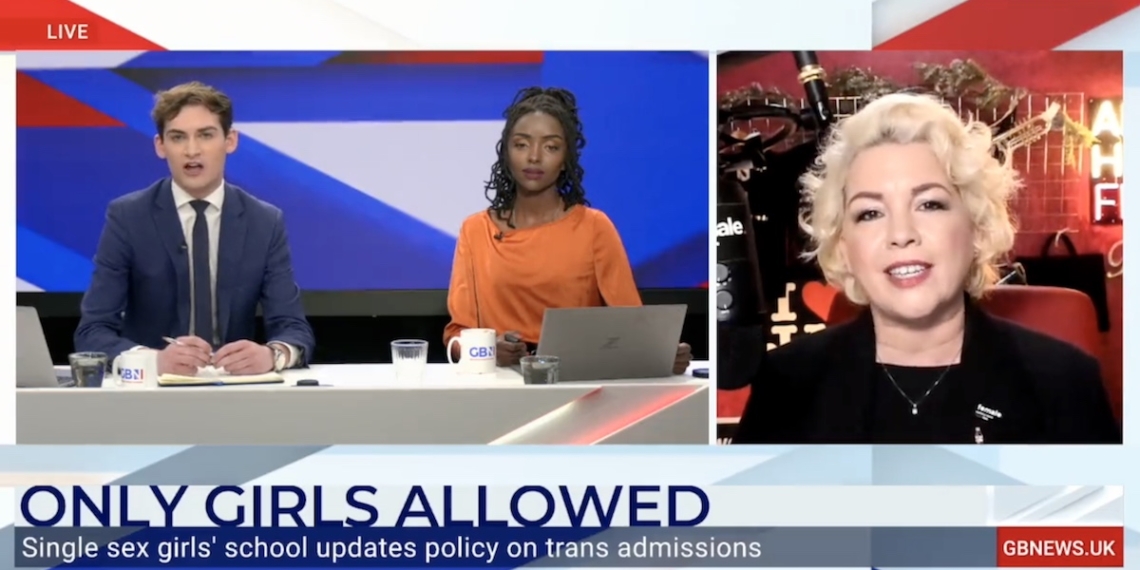 “Man” is not a dirty word – there is nothing inherently offensive about it. And yet, when uttered by a woman it can be such a heinous slur as to threaten the very fabric of society. Over the past week, campaigner Kellie-Jay Keen has been interviewed by two mouthpieces of the right-leaning establishment; Julia Hartley-Brewer’s understudy James Max for Talk Radio, and presenter Tom Harwood for GB News. Keen argues that those who identify as transwomen are by definition male, and as such the correct term for them is “men” and she expressed this view on both channels.

Cue shock, horror and disgust! Faced with a woman telling the truth as she sees it, the presenters were left spluttering and puffing, resorting to accusations of ‘cruelty’ in lieu of counter-arguments. Max called live on air for Keen to be ‘cancelled’ and then took to Twitter to whine about the ‘toxicity’ of debate.

Harwood tweeted that he ‘would much rather’ national debate did not focus on ‘on how nasty and exclusionary some people can try to be.’ He then went on to add to the national debate, penning a piece for the Daily Mail which ended with the rallying cry ‘Anyone who believes in individual liberty and the good old fashioned British value of fairness should take a stand against this new and disturbing anti-trans crusade.’

Ironically, these exchanges, where under-informed men swagger with confidence into an issue that is at its heart, about women’s rights, powerfully make the point that socially sex matters. It’s unlikely a female presenter would’ve been so foolhardy as to wander into a male-dominated topic, like football, to offer her thoughts without careful preparation. Perhaps the hapless presenters were lured into expecting Keen to be accommodating; Keen is heterosexual and wears make-up so she must be reasonable, not like those angry man-hating lesbian feminists. Tellingly, the social justice warriors who normally delight in poking fun at such displays by entitled male, white right-wingers have been silent – perhaps their new bedfellows are making them feel uncomfortable.

During their increasingly heated conversation, Max tried to suggest that Keen’s use of language directly led to discrimination and hatred against those who identify as trans. But it is not women’s rights activists who are violent; it is men who aggressively police the boundaries of masculinity by bullying and beating those who step out of line. Max’s crude attempt at emotional blackmail didn’t wash with Keen, she responded by saying: “I don’t think that the truth is responsible for abuse.”

If ever proof were needed that sexism isn’t just in the fevered imaginations of feminists, Harwood and Max’s reactions to a better-informed woman contradicting them makes the point eloquently.

Keen was not by any objective measure rude or cruel in either interview; she was asked for her opinion and gave it. And yet, for having the temerity to offer a straightforward answer whilst in possession of a vulva, these right-wing free speech champions sought to smear and silence her. If ever proof were needed that sexism isn’t just in the fevered imaginations of feminists, Harwood and Max’s reactions to a better-informed woman contradicting them makes the point eloquently. 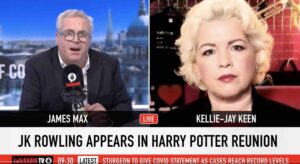 To be acceptable in public space women are expected to modify our behaviour and speech, to perform femininity to complement men’s existence. From the cadence of our voices to the clothes we wear, gossamer-fine but with a grip of iron, these sexist social codes are thread through daily life. Arguably, such expectations are why when polled women are more likely to say they believe “transwomen are women”, we know that as females we will be socially sanctioned and told we are “cruel” if we step out of role as support humans for men. Even in 2022, it remains the case that the social duty of a woman is to be kind and put the needs of others ahead of her own.

The wider insult that underscores this is that men like Harwood and Max think that those who are not sufficiently ‘manly’ deserve to be pushed into the category ‘woman.’ It is a way of keeping manhood pure from those who would break the codes of masculinity by putting on the clothes and affecting the mannerisms of a socially despised class. At a fundamental level the belief articulated over 1,000 years ago by Aristotle, that women are incomplete, deformed men, is so deeply coded into the world view of men like Harwood and Max they fail to see it.

Ultimately, Keen told the truth plainly and in doing so upset the social order that props up the egos of men like Harwood and Max. There are those who vehemently reject sex-based analysis of social situations, dismissing women’s concerns as identity politics. But whilst the name of feminism might have been sullied by fluffy-thinkers like Emma Watson, the treatment of Keen shows exactly why it is still needed.

Living and Loving in the Age of AIDS by Derek Frost: this poignant and informative autobiography records a devastating era for gay men

Trans-substantiation: A quest for truth in the Quakers, by Deborah Evans

by Lesbian and Gay News
409

Kay Knight on Strictly Come Dancing: “This is how homophobia dies: by the joyous celebration of human intimacy, whatever the sex of the partners.”

by Lesbian and Gay News
410