In what could be a pivotal moment in the debates about gender and sex, the Equality and Human Rights Commission (EHRC) issued a stunning response to the Government’s proposals to ban “conversion therapy” (https://t.co/1djOSIrOfN). It zeroed in on the key problems and despite the polite language essentially told the government to get its act together. The EHRC pointed out that since the Government has not defined either “conversion therapy” or “transgender”, it is hard to comprehend what “transgender conversion therapy” would involve. It also notes that while there is ample evidence detailing the harmful effects of gay conversion therapy, evidence in relation to gender identity (on which any definition of “transgender” is bound to rely) is virtually non-existent. You can’t legislate without definitions or evidence. And why should anyone want to try?

By now most readers are probably familiar with what has become known as the “Dentons Report” which advises activists how they can get gender identity legislation passed without public debate, media coverage or parliamentary scrutiny (https://www.iglyo.com/wp-content/uploads/2019/11/IGLYO_v3-1.pdf). Several passages are particularly applicable to the attempts to glue “transgender” to “sexual orientation” in the conversion therapy ban proposals, as if it was all the same sort of thing.

The Report suggests linking efforts to a more popular campaign, such as the promotion of same-sex marriage in Ireland, where self-ID was attached at the last minute. Another piece of advice is to focus on young rather than senior politicians, who can then pass on their message within each political party. A key recommendation is to keep press coverage to a minimum. The Report notes sadly: “The UK has been unable to avoid excessive coverage in the media.” Well isn’t that a pity. Activists in many other countries have successfully followed the Dentons playbook, which is doubtless why children in Norway, for example, can change their legal “gender” from the age of six – without a doctor’s approval or counselling.

Back to Conversion Therapy. The good news is the EHRC has got wise to these tactics and rejects the yoking together of entirely separate issues. It advises the Government to start with banning conversion therapy in relation to sexual orientation. LGB Alliance and others have been proposing this for some time. Everyone agrees gay conversion therapy is vile. Most of the worst forms – electric shock therapy and the like – were banned in the UK almost fifty years ago, but pockets of homophobic coercion remain. If the government seeks to close the remaining loopholes, that’s surely the right thing to do. The EHRC says legislation relating to “transgender” conversion can follow later, on the basis of “more detailed and evidence-based proposals”. As it happens, Hilary Cass is currently carrying out an independent review of gender identity services for children and young people. It is due to publish its report in the latter part of this year. The government should wait until then – and digest its recommendations – before moving on that front.

Crucially, the EHRC cautions the Government that if it nonetheless goes ahead with a ban on both types of conversion therapy, it is essential for the Bill to be subjected to pre-legislative scrutiny.

THE EHRC notes (para. 7): “We are concerned that the consultation does not make sufficiently clear … which forms of communication would be caught by a ban on talking conversion therapy, as this term is used as a ‘working term’.” Quite right. Without a clear definition it is open to misinterpretation.

Crucially, the EHRC cautions the Government that if it nonetheless goes ahead with a ban on both types of conversion therapy, it is essential for the Bill to be subjected to pre-legislative scrutiny.

This is a devastating set of recommendations, and reads like a report by a disappointed teacher marking someone’s homework. The EHRC is the primary body in the UK that protects and promotes human rights. It’s important to protect the human rights of teenagers who are distressed about their sexed bodies: on that we can all agree. Where people disagree is what that protection should involve. 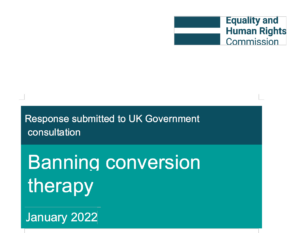 Some people say children who demand puberty blockers should be prescribed them, as a fundamental human right: to refuse the medical treatment they claim they need, it is said, is a form of discrimination on the basis of their “transgender identity”. Children know “who they are” and have a right to refuse psychotherapy – which some wrongly label “conversion therapy” – that helps them explore the causes of their distress.

Others say children (and evidence shows that most of the teenagers involved would otherwise grow up lesbian, gay or bisexual) should be protected from making decisions they may regret, and that put them on a pathway to lifelong medicalisation. They have a fundamental right to that protection. The UN Convention on the Rights of the Child states (Art. 33): “Governments must protect children from taking, making, carrying or selling harmful drugs.” It does not specify that this applies only to illicit drugs. As the evidence continues to accumulate on the harmful effects of puberty blockers and cross-sex hormones, it is surely time to pause and reflect.

Since the EHRC published its response – along with a judicious statement advising the Scottish Government to pause its plans to introduce reforms to the Gender Recognition Act – gender identity activists have reacted in fury. Some have even grandstanded by pompously calling for a boycott of the forthcoming “Safe To Be Me” conference and idiotically smearing the EHRC as a hate group. This tactic of crying “hate” whenever someone disagrees with gender identity ideologues is getting stale and transparent.

There is a disturbing amount of propaganda targeting children and young people online that encourages self-diagnosis and promotes what we might call “body conversion” as a way of solving multiple problems. Let’s make sure that well-intentioned policymakers don’t end up drafting legislation that adds to the problems faced by LGB young people rather than relieving them.

Once a Bill is presented that defines “transgender” and “conversion therapy” and that supplies evidence that “transgender conversion therapy” is going on, proposals to ban it will make sense. At the moment, they make no sense at all. The EHRC is right. Isn’t it refreshing to see a British institution doing its job.

Bev Jackson is co-founder of LGB Alliance and a founding member of the Gay Liberation Front.

Jonny Best on Nancy Kelley’s Woman’s Hour interview: “Barnett zeroed in on a series of salient issues and Kelley rarely had any straight answers to offer – sometimes the more she spoke the less sense any of it made.”

by Lesbian and Gay News
745

Skylar Gwynn talks about ‘The Ride: A Woman’s Rebellion’

by Lesbian and Gay News
268

The Government’s Conversion Therapy consultation ends this Friday and Sex Matters - a great ally to lesbian and gay people - have made it easy to respond, reports Gary Powell