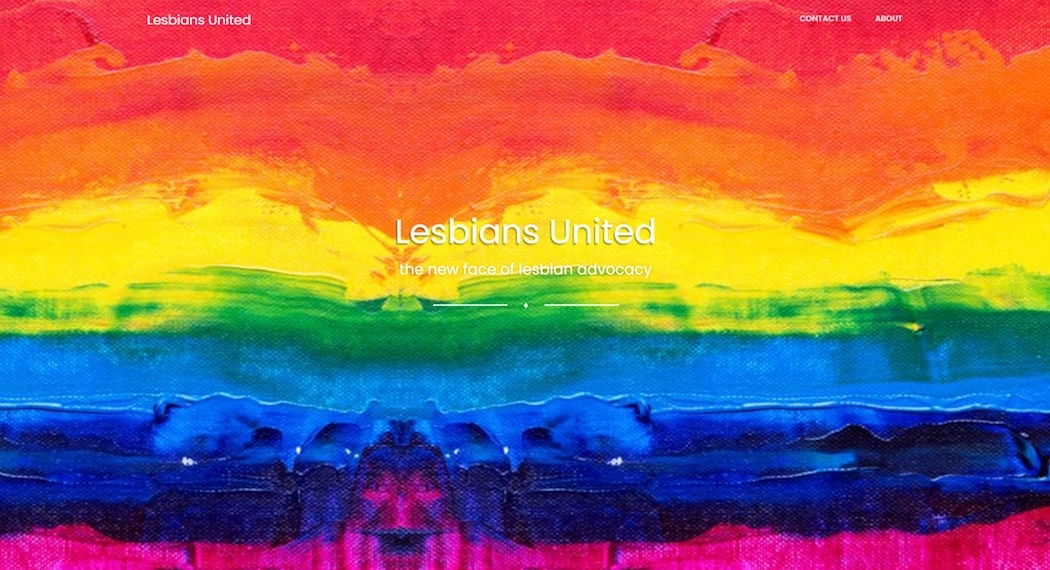 The campaign, currently taking place through social media and the organisation’s website, takes aim at the U.S. medical establishment, which Lesbians United says is pushing young lesbians on to a path of lifelong medicalisation.

Last Friday ‘Lesbian and Gay Liberation’ was reborn on the streets of London, Edinburgh and Belfast, writes D.J. Lippy

“Lesbians are being pushed to ‘transition’,” the organisation’s website reads, “i.e., to undergo unnecessary medical procedures in order to look like men. These procedures are painful, irreversible, and incredibly dangerous. They can and do result in death.”

Lesbians United’s social media posts are accompanied by colourful graphics, featuring to-the-point slogans such as “Gender Dysphoria Is a Scam” and “Join the movement against medical malpractice.” Their targets include pharmaceutical companies, gender clinics, and the American Psychiatric Association.

Lesbians United is a newly-launched organisation based in the U.S. Their mission, as stated on the organisation’s website, is to “advocat[e] for the health and well-being of lesbians” through public information campaigns like Understanding Child Transition, and to combat “popular narratives of ‘queerness’ that keep lesbians apart.”

“The idea is to get as much information out there as we can,” said the organisation’s founder and National Organizer, T., who is unable to use her full name out of fear that both she and her partner will lose their livelihoods. “In the 2020s, public opinion is moulded online. We wanted to start by giving lesbians and allies something to post that looks clean and professional, and presents the facts in a way that’s easy to understand.” 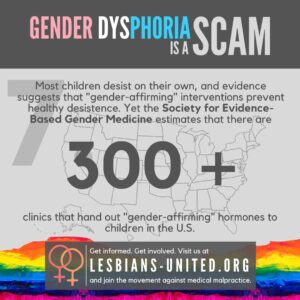 The campaign’s central message is indeed easy to understand: transgenderism is an existential threat to young lesbians. As Lesbians United points out on their website, the diagnostic criteria for “gender dysphoria” specifically target young lesbians for medicalisation. The DSM-V, which is used to diagnose mental illnesses, lists “resistance to the wearing of typical feminine clothing” among the symptoms of “gender dysphoria” in girls. Other supposed symptoms include “rejection of typically feminine toys” and “preference for wearing only typically masculine clothing.” 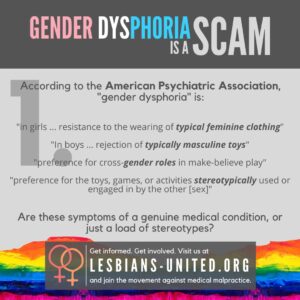 Are these symptoms of a genuine medical condition,” one graphic asks, “or just a load of stereotypes?”

And lesbians targeted for medical experimentation are at increased risk for health conditions and premature death. According to Lesbians United’s leadership, scientific evidence shows that GnRH agonists (the class of drugs now sold as “puberty blockers”) increase girls’ risk for early osteoporosis, heart or kidney failure, chronic pain, depression, and lowered IQ. Artificial testosterone, the next step in the process of turning a healthy girl into a faux-boy, can lead to Type 2 diabetes, chronic infections, and mental health issues, and put girls and women at higher risk for heart attack. The resulting medical conditions can be both life-threatening and incredibly expensive to manage.

“Every time a therapist or doctor rebrands a young lesbian as a ‘trans boy,’” T. said, “the lesbian community gets smaller, sicker, and more economically disadvantaged.” 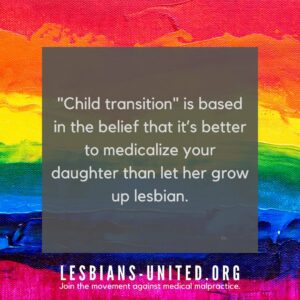 The Understanding Child Transition campaign is scheduled to run throughout the month of February across all major social media platforms, and includes graphics, text threads, and a forthcoming series of YouTube videos.

“We hope it will be a conversation starter,” T. said. “Women and gay men who are critical of transgenderism are being silenced and ignored in the U.S. Lesbians United is working to turn the tide.”

Lesbians United is not currently accepting donations. But their website does feature a call to action for non-members: “The most important thing you can do is spread the word. Share our posts on social media, recommend our website, and be prepared to have difficult conversations with friends and family. Now more than ever, lesbians and our allies must stand up for the truth.”

“If we don’t we get a punishment”: No freedom of speech for women in prison says Dr Kate Coleman, Director of Keep Prisons Single Sex

by Lesbian and Gay News
849

by Lesbian and Gay News
700

London Mayoral election 2021: “Who should we vote for?” asks Jo Bartosch

by Lesbian and Gay News
303 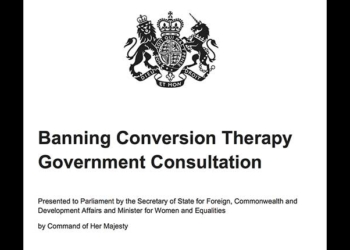