Last week the Equality and Human Rights Commission (EHRC) did their job; they gave expert advice on equality and human rights. But the guidance they offered enraged LGBTplc; from Stonewall to Engender, the past week has seen trans lobby groups frothing online with impotent fury.

Did EHRC forbid lesbians from keeping cats and hiking? Did they issue an edict banning gay men from manscaping facial hair? No, they simply acknowledged that existing sex-based rights risk being undermined by proposed laws which would prioritise purported feelings of gender identity.

The EHRC published two documents. The first was a letter to the Scottish government, advising them not to proceed with planned changes to the Gender Recognition Act (Scotland). Baroness Kishwer Falkner, in whose name the letter is written, explained that it was necessary to both recognise “the established legal concept of sex together with the existing protections from gender reassignment discrimination for trans people”.

The measured tone of the expert legal advice from the EHRC has been drowned out by the doom-mongering hyperbole of LGBTplc.

The second was the EHRC’s consultation response to the Westminster government’s proposal to ban conversion therapy. Sober and evidence based, the lawyerly submission stressed the need for clear definitions and argued that any legislation be scrutinised fully by parliamentarians in both houses.

The measured tone of the expert legal advice from the EHRC has been drowned out by the doom-mongering hyperbole of LGBTplc. Mermaids wailed online, denouncing the EHRC as influenced by “a powerful anti-gender movement that has swept through Europe”. LGBT Youth Scotland complained that they were “hurt and angered” by the letter and both Gendered Intelligence and the LGBT Foundation announced that they were “cutting all ties with the EHRC with immediate effect.”

Stonewall’s response was tellingly petulant. The lobby group drafted a letter, appealing to the authority firstly of the Prime Minister and reporting the EHRC to the UN Office of the High Commissioner for Human Rights and the Global Alliance of National Human Rights Institutions. In essence, the entitled and increasingly unhinged lobby group were unhappy with the service offered and like the much derided “Karen” ridiculed by social justice warriors, Stonewall demanded to “speak to the manager.” Ultimately, they forgot that the EHRC exists to serve a common good, not their agenda.

Former EHRC chair David Isaacs, (who was coincidentally was chair of Stonewall’s board of trustees from 2003–2012), added his voice to the criticism. Last week he whinged to The Guardian: “My view is that an independent regulator shouldn’t be in a position where the governments of the day can actually influence the appointments of that body to support a particular ideology.” Arguably, it is the rebalancing away from the ideology pushed by Stonewall that is beginning to see the restoration of public trust and relevance in the EHRC. 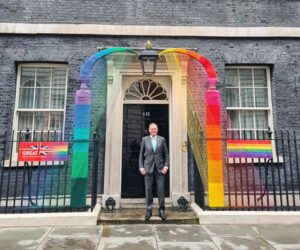 Nick Herbert is organising the ‘Safe To Be Me’ conference

Several large, government-funded trans groups have now publicly rejected invitations to the government’s flagship ‘Safe To Be Me’ conference, due to take place in June. Gendered intelligence and MESMAC have accused the government of using the event to ‘pinkwash’, despite the fact that organiser Nick Herbert (the PM’s Special Envoy on LGBT Rights) is a stalwart trans advocate. Herbert’s seconded team of civil servants who are working on the conference will no doubt be pulling all-nighters to repair the reputational damage, despite the fact as a regulator of equality and human rights law, EHRC has little to do with the ‘Safe To Be Me’ conference.

For years, organisations like Stonewall have bullied and smeared ideological opponents as ignorant and out-of-touch. Charities in the LGBT sector were perceived as “the experts” and the heterosexual mainstream continued paying out to wash away the public sin of phobia. But years of growing fat from funding has made them flabby fighters; and the insistence of “no debate” has left them unprepared to argue their case.

Unlike Stonewall and their allies, the EHRC do not need to pump out stories about an epidemic of violence against trans people to keep the tears and cash rolling in, nor do they need to invent new groups of oppressed peoples to retain the interest of donors. As the regulator of equality and human rights law it is the EHRC’s job to look at facts. Their intervention has been like the return of adults to the room; and the protests of those riding the glitter gravy train are little more than temper tantrums from spoiled brats struggling to understand the word “no”.

Gary Powell’s Reasons for Optimism: “Things are starting to look up for the gender-critical movement and our supporters in the rest of the world are watching.”

Professional Judy: “Carrie desperately wants you to know that she, the unelected heterosexual wife of the Prime Minister – he who once referred to gay men as ‘tank-topped bum boys’ – is an ally and therefore knows what’s best for us.”

Gary Powell on the dire plight of lesbians and gay men in Afghanistan: “Brutal Taliban judicial punishment takes particular aim at those deemed guilty of what it considers to be ‘un-Islamic’ sexual behaviour.”

by Lesbian and Gay News
706

by Lesbian and Gay News
144