When I was a student in university, I was sexually assaulted. I was 18 years old, newly out at my university, when on a night out a transwoman from the LGBT Society insisted on ‘helping me home’ before taking advantage of my drunken state and pushing me into sex. This person messaged me continuously for the next three weeks, asking me to ‘meet’ again, and then sending me pictures of self-harm wounds when I refused. After I eventually blocked this person, they told the LGBT Society that I was a ‘transphobe’, a ‘TERF’ and a ‘slut’. They raped two more lesbians from the LGBT Society before they left university.

This was the testimony I shared with Caroline Lowbridge, a journalist, for the recent BBC article titled ‘We’re being pressured into sex by some trans women.’ The article, carefully written by Lowbridge, was the first mainstream UK article to investigate the ‘cotton ceiling’ – where lesbians are manipulated, coerced and, in some cases, forced into sexual relationships with transwomen. The term ‘cotton ceiling’ itself refers to the lesbian’s underwear, which is deemed by some transwomen as their equivalent of the ‘glass ceiling’ – the final barrier to achieving ‘full validation’. I shared my story last year, the first time I had ever shared this experience in full.

I initially shared my testimony anonymously – in the article I was given the name ‘Chloe’ – as despite being the victim of this assault, I feared the backlash that sharing this story would bring me. And I was unfortunately right to do so. Within hours of being published, the BBC article had been attacked by large online Twitter accounts with Lowbridge herself being forced off of social media due to online harassment.

As one of the lesbians quoted in this article, this backlash has hurt. Deeply. In the time of #MeToo, you want as a woman to feel that your experiences of male violence (because, let’s remember, this is male violence against women) that you will be listened to. Instead, myself and fellow victims have been met with choruses of ‘anti-trans’, ‘TERF’, ‘transphobe’. One particular Twitter individual called our experiences ‘anonymous made-up stories’.

In the days that followed, the hashtags that trended across Twitter, rather than standing with the lesbian victims quoted, were instead ‘LWithTheT’ and ‘CisWithTheT’. Big mainstream LGBT individuals, including actor Mae Martin and comedian Rosie Jones, have also publicly attacked the article, deciding to stand again not with the victims, but with the transwomen accused of sexual violence. Even so-called feminists have sided against the women who have spoken out. Dr Finn Mackay, who calls themself a ‘Radical Feminist’, tweeted ‘there are rapey creeps in our community unfortunately. I just don’t think it’s going to help us to address it’, a view no different, as many other feminists highlighted, than attitudes previously taken towards abuse within institutions like the Catholic Church. Lesbians be quiet, was Mackay’s message, suffer in silence.

But we cannot ask lesbians to suffer in silence. And I have waived my anonymity for this exact reason. If so-called progressives want to stand with perpetuators of sexual violence, and side against the lesbian victims of this abuse, then I want them to know exactly who they are choosing to dismiss. We are not made-up. We are not ‘TERFs’ or ‘anti-trans’. We are simply lesbians. We are not ‘transphobic’ because we are not attracted to males. We are not hateful because we are female homosexuals. We do not owe males access to our bodies, and we have the right to speak out about the violence we are subject to by those who refuse to take ‘no’ for an answer. 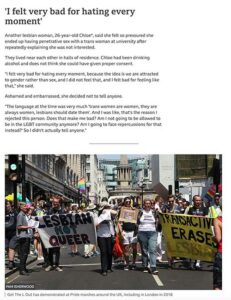 Kat Howard spoke to the BBC’s Caroline Lowbridge as ‘Chloe’

As much as the LGBT(QIA+) community may wish to ignore this, lesbians are being targeted by some (note the word ‘some’) transwomen who demand sexual access to our bodies. The transwoman who assaulted me did so knowing I was a lesbian, a female homosexual, and entirely uninterested in males. The LGBT Society was one dominated by bisexual women, women who may have been more interested in dating someone with intact male genitalia, and yet only lesbians were pursued by this person. This can be attributed only to our sexualities. By ignoring this, and denying the experience of lesbians across the wider LGBT community, the LGBT does itself a disservice, as it opens itself up to accusations of complicity, and excludes lesbians. I couldn’t access my university LGBT Society following my assault, I couldn’t face the perpetrator. Staying silent merely protects abusers, and the LGBT community should know better.

I am incredibly grateful to Caroline Lowbridge, and the BBC for this article. I am grateful also to the thousands of people who have stood in defence of myself and other victims. But, it’s not enough to listen to lesbian victims of abuse. We need help protecting our right to bodily autonomy, and our right to our identity. We need help preserving the word ‘lesbian’ for female homosexuals. We need help holding onto our few remaining lesbian-only spaces, where we can gather in lesbian sisterhood and offer each other the support we are not getting from the wider LGBT community. We need help demanding justice for lesbians who face violence for no more than their innate sexuality. And finally we need help protecting young lesbians everywhere from an LGBT community that would rather see them silenced than stand up to the male perpetrators of assault. Lesbians deserve better.

Kat Howard is a lesbian radical feminist, working as a writer and secondary school teacher.

Julie Bindel: “According to the cool kids on the block, feminists that speak out against transgender ideology are automatically racist. Which is why newspapers lump the two things together, because trans activists do.”

Bryndís Blackadder on Stonewall’s “Creepypasta”: “Like all successful creepypastas it sounds real enough to create a sense of fear about these evil forces, and it leaves you craving more information.”

Julie Bindel: How I miss the lesbian bar

“Coming out... all over again”: James Roberts on Gender Critical Coming Out Day, Sunday 19th December