Professional Judy: “Given the mob’s reaction to Alex he must have done something truly hateful to attract their wrath? Well no actually, he simply wore a T-shirt and beanie hat with LGB Alliance’s logo on it. That’s it.”

I sat down to write this piece several times over the weekend since the news first broke about Alexander Bramham having to be escorted from Manchester Pride for his own safety after he was the victim of an assault and theft. I didn’t want to quite believe what I was reading. I could taste the anger. And then I saw the video, and the Twitter reaction.

As far as I can tell a mob – including self-described “queer woman” April Preston – surrounded Alex, the crowd chanting ‘Trans Lives Matter’ in the same way football hooligans chant their thought-terminating mantras against the other side before using beer bottles to smash their heads in. Preston later tweeted: “Five mins in got a terf removed – happy with that #mcrpride”.

If you can stomach it, the video is harrowing. You can feel the tension and the naked rage from the crowd whipped up into a frenzy by people like Preston, who is the Liberal Democrat’s candidate for Withington, and I found myself genuinely worried about poor Alex’s safety. He is pushed at one point, his hat is stolen, and the police have to intervene in order to keep him safe.

Given the mob’s reaction to Alex he must have done something truly hateful to attract their wrath? Well no actually, he simply wore a T-shirt and beanie hat with LGB Alliance’s logo on it. That’s it.

Make no mistake, what we have seen unleashed over the weekend is latent homophobia that’s always been there and that just needed a socially acceptable reason to present itself.

What we witnessed happening to him on that video for that crime is the culmination of a campaign of lies and smears that has stretched right back to LGB Alliance’s inception. A vicious war of hate played over social media directed at the only group standing up for same-sex attracted men and women. A group whose crime is to assert the biological reality of sex and to highlight that it’s key to the rights of LGB people. A group who can count among their members trans people, and a group who has spoken in support and defence of trans people around the world when they’ve faced persecution.

The lies peddled have ranged from the bizarre such as LGB Alliance is funded by right wing evangelicals or far right American Christians to the ridiculous statement that LGB Alliance want all trans people dead, and the deranged assertion that the Charity Commission’s chair was replaced by an LGB Alliance plant – and that was how they gained charity status. 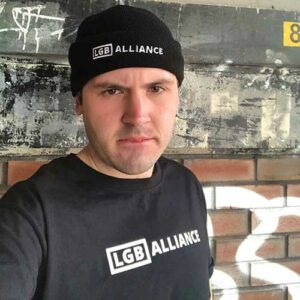 Alex Bramham on the morning of Manchester Pride

None of these talking points are based in fact. But all these lies build a broader context where misinformed people believe them and feel emboldened to target a gay man who simply believes that sex is real and that gender identity is not. Whereas just three or four months ago you could laugh and ignore these claims as coming from obvious cranks with a poor grasp of reality, after this weekend we can’t.

This crap is having a real-world impact, it’s framing a false narrative, and is placing gay men at serious risk of physical harm from Queerist mobs at Pride events.

In the aftermath Twitter was, of course, a complete car crash of bullshit. Some people tweeted that this was the best thing they’ve ever seen, only to offer a mealy mouthed semi-retraction the following morning after the previous day’s ‘festive atmosphere’ had worn off, others that they wished Alex had been torn from limb to limb (yes, I have the screenshot).

Does this sound like the kind gentle souls we’re constantly told about?

Of course, in their haste to align themselves with the mob they’ve helped to create, Guardian writer Owen Jones and soap actor David Paisley don’t really mention those sickening tweets directed towards a gay man for being a gay man, but they instead glorify the baying mob and present it as the most wonderful thing they’ve seen.

Alex Bramham facing the chants of the crowd at Manchester Pride

There has also been the depressingly predictable smears towards Alex: Because he tweeted in May that he’s not “LGBT” he’s not really a gay man; because he’s a Tory he had it coming; because he’s a Christian he’s just there to attack trans people. All of this is, frankly, bullshit being used by Queerists to justify what they know deep down is unacceptable; but in doing this they illustrate what we’re all slowly coming to realise, it’s no longer about fighting for rights for all but it’s about ideological purity. If you’re not on board with their approved way of thinking you’re not a real gay.

Make no mistake, what we have seen unleashed over the weekend is latent homophobia that’s always been there and that just needed a socially acceptable reason to present itself.

“As a gay man, it scares me to see a gay man being harassed & ejected from a Pride March – a PRIDE march – at the behest of straight people & and a gay journalist cheering this on.

Is this what gay men & women from previous generations fought for?

We have to be better than this.”

And you know what? It scares me too, to the bone. I can’t help but wonder if the social media ringleaders will take any responsibility if someone is accosted by their mob, seriously hurt, and when there aren’t any police around? Will they just be fair game? Is that really where 60 years of our civil rights struggle has brought us?

We can’t go to the Pride marches we created because the Queers are likely to bash us?

by Lesbian and Gay News
482

by Lesbian and Gay News
759