Obituary: The rainbow flag, previously a symbol of hope of the lesbian and gay civil rights movement, died in 2020 at the age of 42, writes Professional Judy

The rainbow flag, a symbol the lesbian and gay – later the lesbian, gay and bisexual – civil rights movement stood behind, finally passed away in 2020 after a long battle against late onset terminal internalised homophobia, writes Professional Judy. 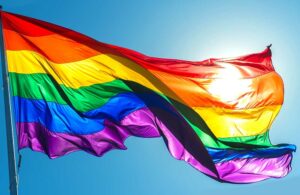 The rainbow flag was originally created in 1978 by Gilbert Baker, a gay man, under the request of writer Cleve Jones, film-maker Artie Bressan, and the first US openly gay elected official Harvey Milk, who was assassinated in 1978. Baker created the flag to represent the revolutionary but egalitarian principles of the lesbian and gay community. In his memoir Gilbert wrote how he took inspiration from both the American and French flags: “I thought of the vertical red, white, and blue tricolor from the French Revolution and how both flags owed their beginnings to a riot, a rebellion, or revolution. I thought a gay nation should have a flag too, to proclaim its own idea of power.”

Milk later rode under the original 8 stripe design at the San Francisco Gay Freedom Day Parade in June 1978 only a couple of months before he was killed. The flag was later redesigned but the general styling and underpinning philosophy that all men and women of all ethnic backgrounds being equal as same sex attracted men and women remained unchanged.

Instead of representing a community that is interconnected by our same sex attraction, it became a symbol of something else. As more letters were added that had little to do with each other, it became a symbol of a political ideology that many of us recognise as being homophobic and working against our interests.

The flag was not seeking to elevate any particular part of our community, what it was seeking to do was to say that same sex attracted are all equal in the oppression that we face, that we have the same struggle to be respected and protected as same sex attracted, and that we had the same need to push back on the expectations that heterosexual society places on us. That was pretty much that for the best part of a decade and a half, that’s what we rallied behind, and that was what the rainbow flag represented. If you didn’t rally behind the flag it wasn’t a big deal, you do you. Besides in those days up until 2015 we developed our own unique personalities (instead of being forced to choose from just over 100).

But then the alphabet soup happened.

Instead of representing a community that is interconnected by our same sex attraction, it became a symbol of something else. As more letters were added that had little to do with each other, it became a symbol of a political ideology that many of us recognise as being homophobic and working against our interests. The political ideology that wraps itself in the rainbow categorises us into two types of gays, the compliant good and happy to do as they’re told gays and the rebellious bad and will not be walked over or told what to do gays.

The good gays who now claim that flag as their own are the ones that have bought into the strict ideology that is working against the interests of same sex attracted men and women. They are the ones that will post historical revisionism that erases lesbians from the Stonewall riots and replaces them with a transwoman who according to his own account was neither trans and was not there. The good gays circle the bad gays and punish them, call them names, and threaten them with rape or violence simply because we will not be gaslit into sleeping with the opposite sex. Yes, we have the receipts, and the lesbians have been complaining about this for years.

Like control freaks they attempt to distort language, so words lose meaning and clear communication made infinitely more difficult, and they do this to eradicate dissent and prevent resistance to their rainbow vomit.

Wrapping themselves in what used to be a symbol of liberation the good gays with their authoritarian online campaigns of hate and reporting the bad gays to their employers stalk us and attack us. Like snitches they love getting the bad gays banned from social media. Like control freaks they attempt to distort language, so words lose meaning and clear communication made infinitely more difficult, and they do this to eradicate dissent and prevent resistance to their rainbow vomit.

As they attack us while waving the rainbow flag the good gays tell the bad gays that being a gay man or a lesbian includes the opposite sex thinking, and bizarrely, that this will also change our actual sexual orientation – but it will not. The good gays spew hateful homophobia when we seek to assert the truth of who we are. The good gays and their authoritarianism march behind the flag that used to be a symbol for acceptance but is now a symbol of homophobic oppression.

Now when I see the rainbow flag in someone’s social media bio my heart skips a beat because it’s likely that the homophobia that I will be confronted by will be on the next level.

The rainbow flag now heralds the online pile on, the cancellation for wrong think, the banishment for not being in step with the homophobic mantras, the blatant attacks on what it means to be homosexual, being told that who we are is offensive and hateful, having our sexual boundaries questioned, and being pressured into sleeping with the opposite sex. It simply no longer represents what gay men and lesbians are.

I no longer feel any connection to the rainbow flag, it no longer holds any special meaning, I no longer have any fondness for it. It is just another part of our civil rights history and the culture that grew up around it that has been stolen from us and twisted into something that is the antithesis of what it was meant to be. Some of us are more equal than others.

A few years ago, before I properly opened my eyes to what was being done in my name, I remember being outraged when someone referred to LGBT activists as the “Rainbow Reich”. Maybe in a very crass and in-your-face kind of way they had a valid point? What does the rainbow flag mean to you? Does it still hold a fondness in your heart, or has it become something else?

Jo Bartosch on the disappointment of Lesbian Visibility Week: “It seems if one wants to take part, acceptance of the mainstream line on trans inclusion must now be performed, even if not believed.”

Gary Powell: How the new anti-LGB fundamentalism of gender extremism mirrors the homophobia of the 1980s

Gary Powell: Why the LGBT Advisory Panel should be disbanded… for good. And my plan for moving forward.

Gary Powell: How the new anti-LGB fundamentalism of gender extremism mirrors the homophobia of the 1980s